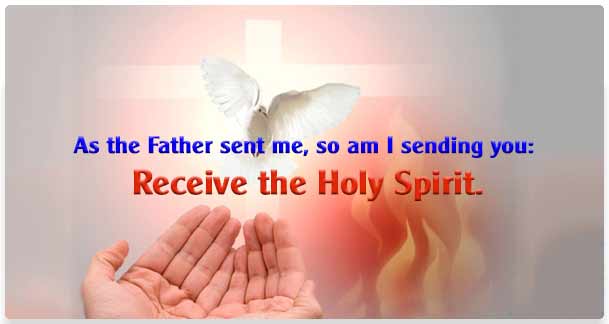 Jesus’ Life: Chapter 20 – Early Spread Of Gospel By the Disciples

Pentecost, the day the Holy Spirit descended on the Apostles, was previously known as the Feast of Weeks. It was an important day in the Jewish calendar, drawing large crowds from “Every Nation.” (Acts 2:5) It was celebrated fifty days after the Feast of Firstfruits which was the day Jesus’ arose from the dead, Easter Sunday. (Note: Pentecost means “fifty”.)

Early in the morning, the Twelve Apostles, including Matthias, were gathered together possibly, for morning prayer. “Suddenly a sound like a violent wind blowing came from heaven and filled the entire house where they were sitting”. It was not a wind but like one because of the sound that it made. Then “tongues spreading out like a fire appeared to them and came to rest on each one of them,” remaining for a moment and then vanishing. “All of them were filled with the Holy Spirit”. (Acts 2:2-4)

The multitude of people who packed Jerusalem’s streets for the Feast were alarmed by the sound. They gathered together around the house which the Apostles had by then vacated but only to be “completely baffled;” the Apostles were out in the streets and courtyards fearlessly preaching Jesus’ Gospel in multiple languages!

Aren’t they Galileeans, they asked! Then how is it, “that each one of us hears them in our own native language? Parthians, Medes, Elamites, and residents of Mesopotamia, Judea and Cappadocia, Pontus and the province of Asia, Phrygia and Pamphylia, Egypt and the parts of Libya near Cyrene, and visitors from Rome, both Jews and proselytes [new converts], Cretans and Arabs – we hear them speaking in our own languages about the great deeds God has done! What does this mean?” (Acts 2: 8-12)

As Simon Peter later remarked, “No prophecy ever came through human will but rather, human beings moved by the Holy Spirit spoke under the influence of God”. (2 Peter 1:21)

The Apostles were now Jesus’ invigorated instruments, moved by the Holy Spirit and tasked with preaching the Word of God to all nations, spreading Christianity throughout the world. (Acts 2:1-13)

Not everyone had an open mind to what the Apostles preached that early Pentecost morning! Despite it being 9.00am, some suggested,  “They are drunk on new wine!” (Acts 2:13)

It’s easy to find fault in others, isn’t it? It’s much more difficult to look inside ourselves, open our hearts and change our disingenuous ways!

Lord Jesus,  grant me the grace to see myself as others see me and, through the power of your Holy Spirit, help me to spread your Gospel to my family, my community and the world.

Steer the ship of my life, good Lord,
to your quiet harbour,
where I can be safe from the storms of sin and conflict.
Show me the course I should take.
Renew in me the gift of discernment,
so that I can always see the right direction in which I should go.
And give me the strength and the courage to choose the right course,
even when the sea is rough and the waves are high,
knowing that through enduring hardship and danger,
in your name, we shall find comfort and peace.