Feast Day: Dedication of the Basilicas of St Peter and St Paul

Today, Bishops are required to visit “the Tombs of the Apostles” every five years and report on the status of their Dioceses to the Vatican. 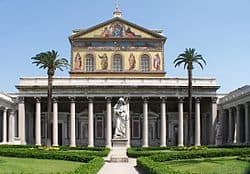 Short Story: Jesus told the Parable of the Gold Coins.

In it, he described an overjoyed Nobleman when he returned from a distant country and received, from one of his servants, twenty gold coins in return for trusting him with just ten.

The Nobleman said, “Well done, good servant. You have been faithful in this very small matter; take charge of ten cities”. (Luke 19:17)

Thoughts: A young elementary school child’s understanding of the parable went like this:

“The servants were being tested by their boss. He wanted to know if they could look after his gold; to see if they loved Him. If so, he would take them up to heaven; if not, well I don’t know what God would do with them!”

Private Reflection: Lord Jesus, your love links earth to heaven. Lift my eyes to see your glory, so that where you are, I may be also.

Prayer: God’s Kingdom ~ Pope Pius VI
May your Kingdom come for all people,
of every language and nation;
your Kingdom of justice, of peace, of love,
and may all the earth be filled with your glory.
We make this prayer through the Prince of Peace. Amen.

Saints Peter and Paul: Pray for Us

Today’s Music Suggestion: At The Cross