Saints Simon and Jude were two of Jesus’ Twelve Apostles.

St Simon is often referred to as Simon the Zealot which clearly distinguishes him from Simon Peter. Both are regularly mentioned in the New Testament.

St Jude’s father was Clopas and his mother was Mary, cousin of the Blessed Virgin Mary. Clopas was martyred for his outspoken devotion to Jesus.

The most commonly accepted tradition is that Simon and Jude traveled and preached the Gospel separately before jointly evangelizing in the Mediterranean and Middle East. St Jude and St Simon were martyred around 65AD in Beirut. Their remains were later transferred to St Peter’s Basilica, Rome. 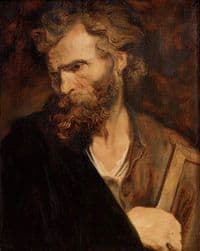 Short Story: Before Jesus appointed his twelve Apostles he went to a mountain and spent the night alone in prayer.

In the morning, he returned to his disciples and chose twelve of them, the Twelve Apostles – Saints Simon and Jude were among them.

Thoughts: Our daily decisions, small and large, somewhere down the line, impact on others; take time to pray, share the decision-making with God!

St’s Simon and Jude: Pray for Us