Joseph was born in Leonessa, Italy. In his childhood, it is said that he regularly built small altars and grottos at which he prayed and invited his friends. Although expected to get married, after recovering from a serious illness, he instead joined the Franciscian Order; he was 16yrs old. Aged 31, Joseph was sent to Constantinople to minister to imprisoned Christians. There he lived in poverty and preached daily in the city. His insistence on preaching led to his own imprisonment and sentence of death. It is said that miraculously Joseph escaped from the gallows and was able to return to Italy where he spent the remainder of his life preaching and helping the poor. 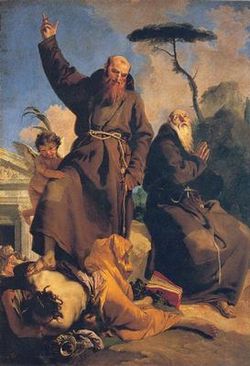 Short Quote:   Jesus began teaching in his hometown of Nazareth. “Many who heard him were astonished, saying, where did he get these ideas? And what is this wisdom that has been given to him? What are these miracles that are done through his hands? Isn’t this the carpenter, the son of Mary” (Mark 6:2-3)

Thoughts: Sometimes it is those who know you better than anyone else, the ones that you grew up with, that let you down the most! Jesus’ hometown friends were astonished at his work but they also refused to accept him.

Private Reflection: Who do I exclude from my life? How can I make amends, make peace?

St Joseph:   Pray for Us

Today’s Music Suggestion: From a Distance