St Agnes was born a Princess into a Royal family and was expected to marry Royalty. At the age of 8yrs she was engaged to Henry King of the Romans (son of Emperor Fredrick II – King of Sicily). Henry was at the time 10yrs old. Six years later her engagement was cancelled but Agnes remained a “valuable marriage pawn” to those in power. As family friendships and European politics changed, their plans for Agnes also changed but Agnes, quickly grew tired of their revised “Royal” expectations. Instead, she decided to take control of her own future and opted for a life of charity and piety over a life of comfort and luxury. St Agnes’ early pioneering action was to establish a hospital with the help of the Franciscan’s and Poor Clare’s. Agnes later joined the Poor Clare’s and became an Abysses. She died, at the age of 70yrs, in her established hospital/monastery complex. 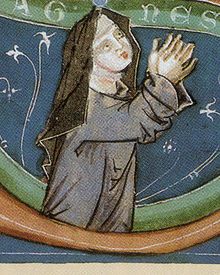 Thoughts: Jesus reminded us many times, do on to others as we hope God our Father will do to us; put others first!

Private Reflection: Lord Jesus, may my actions bear witness to the faith I profess, and excuses find no resting place within my heart.

Prayer: An Invitation
O God, help me to fully accept your invite,
and concentrate only on you:

Lord, whatever this day may bring,
may your name be praised forever.
(Adapted by Prayer Calendar – Dietrich Bonhoeffer)

Today’s Music Suggestion: Bind us Together