St Teresa Benedicta was born the youngest of eleven children into a Jewish family at Breslau, Germany. By her teenage years, she had become an atheist.

A talented academic, she studied at the University of Breslau and received a Doctorate from Gottingen University. She then became a Teaching Assistant at various Universities. Through her studies and readings, notably the autobiography of St Teresa of Avila, she converted to Catholicism and resigned her assistantship to teach in a Dominican convent school. During the following years she produced many writings including a translation of Thomas Aquinas’ “Of Truth” into German, She also wrote to Pope Pius XI denouncing the Nazi regime for its abuses in Christ’s name.

In 1932 St Teresa Benedicta entered the Discalced Carmelite Order and was transferred to the Netherlands along with her sister, who had likewise converted to Catholicism and joined the same Order. In 1942 they were both arrested, as Jewish converts, along with 987 other Jews and taken to Auschwitz concentration camp. They were executed in a mass gas chamber, possibly on the 9th August 1942. St Teresa Benedicta is one of the six Patron Saints of Europe. 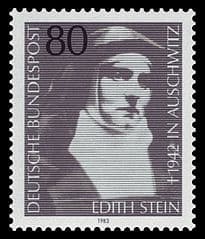 Quote:  During Pope Benedict’s 2009 visit to Auschwitc Birkenau he said, “To speak in this place of horror, in this place where unprecedented mass crimes were committed against God and man, is almost impossible — and it is particularly difficult and troubling for a Christian, for a Pope from Germany. In a place like this, words fail; in the end, there can only be a dread silence — a silence which is itself a heartfelt cry to God…  our silence becomes in turn a plea for forgiveness and reconciliation, a plea to the living God never to let this happen again”.

Thoughts and Reflection: Pope Benedict ended his visit to Auschwitz-Birkenau saying: Humanity walked through a “valley of darkness.” And so, here in this place, I would like to end with a prayer of trust — with one of the Psalms of Israel which is a prayer of Jews and Christians:-

Prayer: Psalm 23:1-4,6
The Lord is my Shepherd, I shall not want.
He makes me lie down in pastures green,
He leads me beside quiet waters, He restores my soul.
He guides me in paths of righteousness for His name’s sake.
Even though I walk through the valley of the shadow of death,
I will fear no evil, for you are with me;
Your rod and Your staff, they comfort me.
You prepare a table before me in the presence of my enemies.
You anoint my head with oil, my cup overflows.
Surely goodness and kindness will follow me all the days of my life,
and I will dwell in the house of the Lord forever. Amen.

St Teresa Benedicta:   Pray for Us